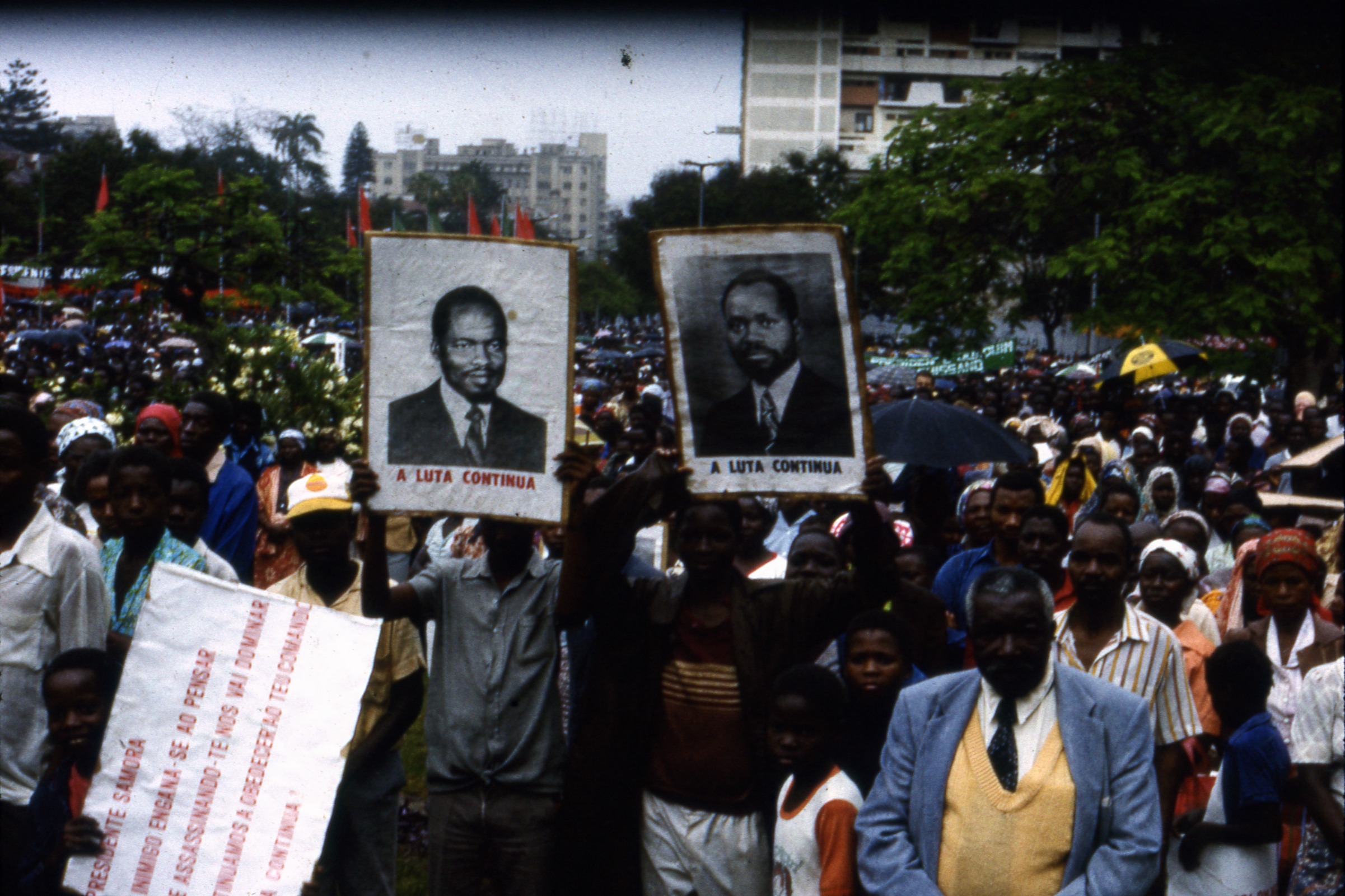 Almost every Mozambican city today has a monument to Mozambique’s first president and founder, Samora Moisés Machel.  This proves that the president, who was murdered in 1986, is deeply rooted in the consciousness of the Mozambican population and that his ideas about the design of the Mozambican state still have an effect today.

In my book “Berichte aus dem Morgengrauen. Als Entwicklungshelfer der DDR in Mosambik” documents the events of 19 October 1986 and provides further facts in my contribution “How many people lost their lives in the death of Samora Machel”.

In the morning of that day I pressed the recording button of my radio recorder and am in possession of a unique document of “Radio Mozambique” (RPM).

The following recording from my archive contains the communiqué of the Frelimo, presented by Marcelino dos Santos, member of the then Central Committee, on October 20, 1986, about the crash of the president’s machine.

In my book I have described the events of that time:

At first, the beginning of our working day at the Maputo Ministry of Education on 20 October did not differ from the days before. Abel Assiz, my Mozambican colleague and leader of the history group for secondary education, had hired his small portable radio and dedicated himself to his work.

The radio had always been on since Rogelio, a Cuban consultant, and I had gotten batteries for the device. No matter what radio broadcast was on Mozambique, everything that came through the radio was reproduced in croaking tones. Sometimes it was a disruptive factor in concentrated work. Abel loved the radio more than anything.

That morning we listened with half an ear until I told the other two that funeral music had been playing all along. Rogelio and Abel listened and confirmed my advice. We had no explanation for it. Around 8.30 a.m. the music stopped and after a short break the voice of Marcelino dos Santos sounded.

The communiqué announced that Samora Machel was on her way back from Mbala in Zambia to Maputo. When approaching Maputo airport, the plane crashed on South African territory near the town of Mbuzime, about five kilometers northwest of the Mozambican border town of Namaacha, for unknown reasons. The last word of the communique had hardly faded when Abel, whose face expressed horror, jumped up and ran out of the room with his fists pressed against his temples. Rogelio also rushed out.

In the houses. On the streets and squares.

“The President is dead!

The man who had led the young state since 25 June 1975 was no longer there.

Why was the plane the President had not landed as planned the previous evening? How did the plane get on South African territory? Why did the South African government not announce the TU 134 crash until the next morning?

Maputo and the whole country were in an unbearable state of tension.

In addition to the president, another 33 people died. Two Cuban doctors were among them and the professionally experienced Soviet occupation. Ten people survived.

The night of October 21 was the strangest I experienced in Africa.

It was the night of peace, silence, absolute silence.

No life on the streets.

No noises from the houses.

And – the thousands of dogs remained silent.

It was as if man and animal were listening with a held breath in anticipation of any event. In my mind I relived the events of the year that I had returned to Mozambique after a two-year break.

A year full of events.

The Apocalyptic Horsemen went through the country.

Read more: “How many people died in the death of Samora Machel?”